In my drive to find something new to occupy too much of my time with since I'm out of WoW, I've tried out a couple of F2P MMOs. My Mabinogi impressions were pretty favorable, while my Earth Eternal one... wasn't (it felt very blah to me). Since Beau over at Spouse Aggro has talked many times about Wizard101, I figured why not try that out too? The nice thing about these lower-spec F2P games is that it's so easy to hop in and give them a test drive with no strings attached. =) 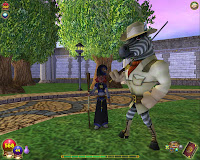 So yeah, it's a cutesy kid's game. So was Pokemon, which absorbed many a hour for me back in Junior High. I don't knock a game based on graphics or style alone, as long as it's fun to play. So even though the art style wasn't very appealing to me I determined to give it a fair shot.

The first thing I noticed was that every quest is voiced. So I turned the voices down. =P Personally I don't like voices in most games, though I understand a lot of people do. The game also has a very restricted chat policy (to ensure kid-safe conversations) and a large selection of canned words and phrases that people on closed chat can use to still communicate game-related information. If you're over 18 you can turn off all the restrictions from the account website. I thought it was an interesting way to keep general chat safe for kids without parents having to worry. 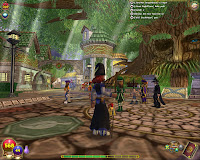 The seven Magic Schools reside in the
Ravenwood District of Wizard City.

Combat is 'collectable card battle'-style and turn based. Different wizard schools (you pick your school at the beginning) get cards with unique elements and abilities. For example, Storm magic has very strong attacks but with a high failure rate, while Balance specializes in buffing/debuffing, and Life specializes in healing. You can buy cards from other schools of magic with Skill Points, which you earn from certain quests as well as by leveling up. You can customize your deck of cards in many ways: by choosing which cards from your own school you want to use in a specific situation, by buying 'Treasure Cards' which are one-use cards that give you spells you otherwise couldn't learn, and by buying spells from other schools of magic by spending skill points. The card system really has more depth than you'd think for a kid's game, particularly at the higher levels. 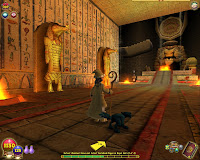 Inside the Pyramid of the Sun dungeon in Krokotopia.

There are some cool elements I really like about grouping in Wizard101: Not only can anyone group at any level with anyone else simply by running up to them while they're fighting a monster, but xp has nothing to do with the level of the people involved in a battle -- money and loot is distributed equally to everyone, and your exp gain depends on the skills you used in battle. In other words, people of varying levels are not punished for helping each other. Also, you can instantly teleport to anyone in your friendlist wherever they are, even if they are in an instance, which makes helping friends easy. But with proper deck design, most bosses are actually soloable if that's your preferred gameplay style. There is also ranked PvP dueling if you get tired of outwitting PvE mobs. 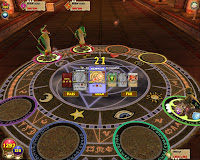 The combat circle and my current hand of cards.
Anyone can join a group by running onto an empty party circle.

Also: HOUSING! :D Furniture comes from shops, crafting, monsters and quests, and there are several styles of house or castle that you can buy (you are given a free dorm room when you start out). Even the cheapest house has a very nice lot, often with fun little details like waterfalls, beaches or caves outside the house itself that you can spruce up however you like. I can imagine that just getting enough items to decorate it all is a task in itself. One flaw is that furniture is not really interactive, though you can invite people over to show off your interior design and landscaping skills. =) 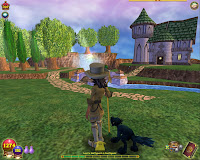 You can preview player-house lots before you buy.
This is the cheapest Wizard City house option, and it's pretty nice!

Most of the RMT items (mounts, special potions, etc) are optional unless you want a specific pet or mount for luxury's sake. So far I haven't felt penalized for not using the Crown Shop at all, which is nice. I probably will get some things eventually, of course, just because I personally love fluff items and 5$ here or there is really nothing, especially if you're enjoying the game. RMT in Wizard101 doesn't make you feel disadvantaged for not using it unless you're the type that just HAS to have a certain fluff item (like me, lol).

All in all, Wizard101 is a fun little game. It doesn't try to be an epic fantasy world, and it doesn't have to -- it succeeds in being a fun, solidly-designed multiplayer game with RPG elements. It's well worth it's $10 a month fee, imo.

BONUS: An interesting article from Game Developer Magazine dealing with the behind-the-scenes development of Wizard101 is here. The devs talk about lessons they've learned while working on the game, as well as early design mistakes that they'll have to fix as they keep the game growing.
Posted by Pai
Email ThisBlogThis!Share to TwitterShare to FacebookShare to Pinterest