My attention was recently drawn to this re-released action RPG, Divinity 2: The Dragon Knight Saga. This game originally came out sometime last year, with the subtitle 'Ego Draconis', and was generally described as a good game hindered by various balance issues and technical bugs, which have apparently been addressed in the new 'remastered' version (which also comes with a bundled expansion pack). A new demo of the game was released as well, so I figured I'd try it out and see how I liked it, since I've never played any of the modern western-style action RPGs (I know, the horror!). I've never had a PC capable of playing one, frankly. Since Divinity 2 has been compared to respected games like Baldur's Gate and Ultima, I figured it would be a good game to start on! 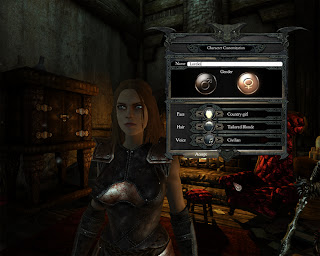 The game starts you off with character creation, which is basic but adequate. You can choose your gender, face, hair color, voice, and some minor facial decorations (none are all that different from each other, but just enough to add a bit of personal taste to your avatar). Then you're dropped into a tutorial zone, of sorts, and initiated into the ranks of the Dragon Slayers -- a military order that hunts down and kills Dragon Knights (people who have the ability to transform into a dragon). The reasons behind this vendetta is based on a betrayal by a Dragon Knight more than half a century ago that resulted in the death of the world's Divine, a savior-like figure. As a result, nearly all Dragon Knights have been killed by the time your character starts their journey. 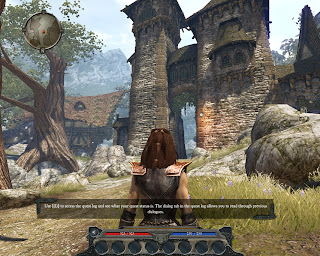 Since I just d/led the game without reading the manual or any FAQs ahead of time, it took be a bit to figure out how to add skills/items to my hotbar and some other minor controls, but overall I got the hang of things fairly quickly. My biggest issue was not being able to see the crosshair in certain areas, which may just be my own crappy vision problem. =P Also, the lighting of the early part of the second area you visit seemed really murky orange (I guess it was supposed to be early morning?) but that may have been because I had to play with graphics set to Medium, only having half the RAM required to run graphics on high. Once it became daytime proper though, the lighting became much better, which improved the color and sharpness of things overall. Once again, the problem with the low contrast might just be me (maybe I need to get my eyes checked).

The first thing that I really had fun with was the 'Mindreading' ability you get right at the beginning of the game. It lets you pick the brains of various NPCs, which can give clues to hidden items, quests, and other useful info that you'd otherwise not have access to. Of course, sometimes you just hear pointless babble, too. Realizing, for instance, that a particular shopkeeper is desperate for business can get you better prices on his wares. Or you can learn someone's dirty secret and either blackmail them or turn them into the authorities. 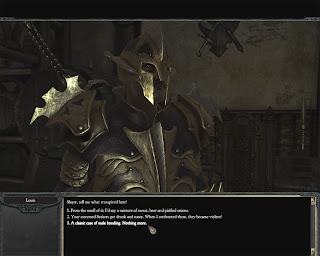 In general, the quests in the game are very diverse and some even have multiple options for completion (or even failure). I also liked how you get several choices for quest rewards, from extra experience or money to items and weapons. Besides the main storyline quest, there are lots of sidequests and hidden quests, so that exploring every nook and cranny and talking to everyone you meet almost always pays off in one way or another. You can also invest in a 'Lockpicking' skill to access various locked doors and boxes that you come across. One always gets a sort of evil glee in rifling through boxes/chests/closets in people's houses looking for stuff. =) 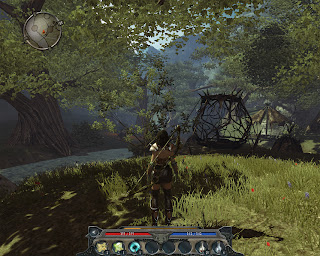 In terms of character development, there are 5 skill trees (with 3 combat styles) you can invest Skill Points in when you gain levels. The combat types you can specialize (or hybridize) with are Mage, Warrior, and Ranger with secondary 'general purpose' trees with abilities like Fear, Stealth, or summoning spells to call helpful undead to aid you in battle. Every time you level up, you get points that you can spend however you like in both your base stats as well as in your skill trees (and for gold you can also respec if needed). Combat is action-oriented, with targeting and dodging done by the player, and what seems like a 'soft lock' mechanic for ranged skills. 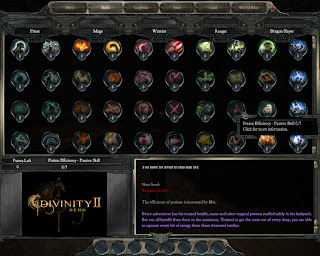 The game has great music, and decent voice acting. I generally hate dubbing in games, but Divinity 2's are not grating to listen to like in some other games.

The demo ends with your character obtaining the 'curse' of a Dragon Knight, which is the true beginning of the story. Even though it's just a few hours' worth of play, the demo really packs a lot of the flavor of the game and shows many of it's features while hinting at others to come later (like the ability to craft your own undead minion). I will admit that I have not played many western PC RPGs, so for all I know the game could be full of genre cliches that seem novel just to me, but either way I really enjoyed my short time in Rivellon and I'm planning to get the full game for sure. I really liked being able to find hidden areas/quests, exploring the beautiful landscape, and the different strategy and playstyle options the game has. The fact that Larian (the game's creators) are a smaller studio just makes what they've accomplished with this game even more impressive, imo. I recommend trying out the demo at least, if you are in any way a fan of singleplayer RPGs.
Posted by Pai No comments:
Email ThisBlogThis!Share to TwitterShare to FacebookShare to Pinterest

Border House has posted thoughts about the new Lara Croft design, and how the character has changed since her original creation.

All I have to say is, WOW, she looks amazing!