[Is the Traditional MMORPG Obsolete?]

Raph Koster has an interesting post on his blog speculating that the 'virtual world' MMORPGs where immersion and roleplay were the ultimate goal is a thing of the past. I think he's right -- it seems that more 'game-y' MMOs (often called 'theme-park style games) are the new norm.

I think this is plain in the generation gap that is visible among MMO players nowadays -- the 'oldschool' player who wants an MMORPG with deep lore to follow, and a world they can lose themselves in and feel a part of. These types are largely derided by the 'new wave' of theme-park gamers who scorn those that RP, or care about lore, or who express a desire for more 'immersion' and game mechanics that encourage a 'fantasy life' experience. The oldschoolers want avatars that are detailed and highly customizable so that they can create a representation of themselves that has a deeper personal meaning; the new generation sees avatars as simply 3D mouse cursors that are used to interact with the game environment.

The oldschoolers scorn the entire idea of a 'themepark ride on rails' with 'shallow worldbuilding'. They are disappointed in most modern MMORPGs because the concept of a 'virtual fantasy world that you can pretend to live in' is not what the modern MMORPG is about.

Related Link: The rise of RMT and the decline of RP in MMORPGs
Posted by Pai No comments:
Email ThisBlogThis!Share to TwitterShare to FacebookShare to Pinterest

So the Russian Free-to-Play MMORPG Allods Online went into Open Beta on the 16th, and I decided to check it out, since what I'd heard of it before sounded kind of interesting. I've been on more of a 'casual playing' kick since my WoW hiatus, and F2P games like Mabinogi and Wizard101 have been filling my time rather nicely, so I figured I'd give a new one a go. I have to be honest, one gets a real WoW-vibe when first starting out, simply because the art style of Allods is very 'hand-drawn' as well. The game world is simply beautiful, and very impressive for a F2P game. The soundtrack, however, is pretty generic western fantasy-MMO fare, and pretty forgettable. I know many people often prefer their own soundracks anyway, so that's not a big deal. There are also many similar UI and 'quality of life' mechanics that are the same between both games (like a quest tracker, Auction House, talent trees, etc) but Allods puts it's own mark on these now-familiar aspects that many people consider 'standard' in their MMOs now. One thing I actually did NOT miss was a minimap -- I find that I tend to stare at the little dots on it more than I actually look at the gameworld around me if I have one, so Allod's simple compass and well-marked worldmap were good enough for me. =) 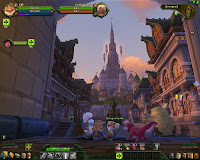 The classes in the game are also a nice mix of familiar roles and archetypes with enough unique spin added to still make them interesting. Add to that the various talent trees and unique racial skill combinations, and you have many diverse customization options for your character. 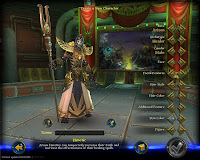 The game has two PvP factions -- the lighter, fantasy-themed League and the darker steampunk-style Empire, and each has their own unique selection of races. There are two human cultures, a fairy/elf race, the Arisen (zombie cyborgs), Orcs, and the token 'goofy, short race', the Gibberlings (which look like a mix between hamsters and feral kittens). A fun aspect of making a Gibberling character is that you actually end up customizing and naming three individuals who then act as one unit (because Gibberlings as a culture always do things in groups). 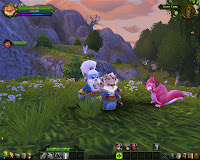 The stand-out endgame option that Allods Online has is it's Ship-to-Ship combat in the areas between the allods (world islands). A minimum crew of 6 players controls each ship, with one player manning guns, another navigating, etc. Groups can pilot ships to allods that are inaccessible by any other means, and then explore and accumulate treasure there which they can load into their ship's hold and take back to their home port to earn rewards. However, once in transit, airships can be attacked and robbed by enemy crews, or even destroyed completely, losing all their loot. Therefore, airship exploration and piracy is a viable endgame goal for guilds, as well as the usual fare of PvE raids and PvP. 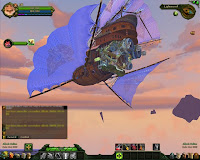 I've only played for a few days, but I'm very impressed with the level of quality Allods has for a F2P game. The quests are nothing innovative, but I'm having fun exploring and enjoying not feeling pressured to 'get my money's worth' like I do with a P2P game. Allods also doesn't have the problems with empty grinds or lack of content like many other F2Ps. Frankly, I think Allods Online is one of the best free MMOs on the market right now, up there with FreeRealms, Mabinogi, and Wizard101. You get tons of entertainment for free, plus the game runs well and looks fantastic. I think the current Cash Shop items are overpriced (and there are no cool 'fluff' items for sale yet), but since I haven't felt a need to buy anything so far I'm ignoring it for now (I hear that statistically, the majority of F2P players never buy anything, but the small minority that do generate enough revenue for the games to profit anyway).

If you like many of WoW's basic mechanics (or WoW's art style), but want a change of scenery or something a little different, you should check out Allods Online. It's a very polished, solid game with some fun concepts (even if it's not a huge revolutionary step in the genre of MMORPGs), it's worth checking out. =)
Posted by Pai No comments:
Email ThisBlogThis!Share to TwitterShare to FacebookShare to Pinterest
Newer Posts Older Posts Home
Subscribe to: Posts (Atom)