I made my peace with F2P and Cash Shops a long time ago, and am getting to enjoy more games because of it, but I really do not get the logic behind EVE Online's new vanity item pricing, even after they explain it:


"People have been shocked by the price range in the NeX store, but you should remember that we are talking about clothes. Look at the clothes you are currently wearing in real life. Do you have any specific brands? Did you choose it because it was better quality than a no-name brand?

Assume for a short while that you are wearing a pair of $1,000 jeans from some exclusive Japanese boutique shop. Why would you want to wear a pair of $1,000 jeans when you can get perfectly similar jeans for under $50? What do other people think about you when they see you wearing them? For some you will look like the sad culmination of vainness while others will admire you and think you are the coolest thing since sliced bread. Whichever it is, it is clear that by wearing clothes you are expressing yourself and that the price is one of the many dimensions that clothes possess to do that in addition to style and fit."

Out of all the F2Ps I've tried, I have never seen a vanity-clothing item go for more than $20 (maybe there's some out there, but none that I've played). And unlike EVE, those games don't require monthly subscription fees. I'm not sure why CCP would rather sell FEWER outfits at a higher price than MANY for a more 'market average' price -- there are far more people who'd be willing to pay even $20 for a 'virtual shirt' than there are those willing to pay $50+. Perhaps CCP feels the EVE playerbase is so 'different' that there is no real comparison between the typical MMO's cash shop and EVE's. But going by the angry reaction of many EVE players, they are clearly disappointed that the prices for tiny things like Monocles ($70?!) are so much higher than they are willing to pay -- in other words, they WANT to give CCP their money, and would if the items were more reasonably priced.

Sure, nobody 'has' to buy vanity items. But why make the cash shop hostile to most players and not a 'fun' experience for people? To me that's like saying you DON'T want more people to use it! How does that make sense?

The fact still remains, that a lot of the Western MMO playerbase is still very touchy and suspicious about microtransactions in their games, and this move by CCP appears to me to be souring those people even more on the concept than they would've if they had taken a more player-friendly approach for their cash shop introduction. Only time will tell if CCP's belief that EVE's playerbase is a good match for this extreme microtransaction model proves true.

Related Reading: Fear and Monocles
Posted by Pai No comments:
Email ThisBlogThis!Share to TwitterShare to FacebookShare to Pinterest

Eden Eternal is the latest MMORPG offering from Aeria Games, and has a lot of unique features compared to most of the current F2P market in the U.S. It's very polished and offers many 'quality of life' features that I haven't seen in the other F2Ps I've played, and after participating in the Closed Beta I've come away really impressed so far.

First off, the graphics of the game are in a colorful, hand-drawn cartoony style, down to the 'pencil lines' present around objects (which I've see done before in other F2Ps, but never as seamlessly as in EE). This gives the game's look a very pleasing, distinctive style.

The core gameplay feature is unlimited multiclassing -- you can eventually unlock and switch between every class in the game freely, which eliminates the need for making multiple alts in order to try out different playstyles or group roles. As you level different classes, you unlock 'Certificates' which are items that can be mixed and matched across classes that offer passive bonuses of various kinds. On top of that, each class has it's own skill tree where you can allocate points to further customize your character. I think this is the number one draw the game has, hands down. Bored of being a tank? Transform into a Bard or Thief and try out a whole new build and set of skills! One gameplay aspect that doesn't seem to be in EE is crowd control, instead most classes have aoe abilities and can take on multiple enemies at once, at least for a short while.

Besides at-will class switching, your appearance ingame is not affected by your gear at all. Instead, each class unlocks various 'Outfits' as they level up, which can then be dyed to your liking with colors that are buyable at low levels ingame, but only available through the Cash Shop once you hit level 25 (though as with most F2Ps, nearly all Cash Shop items are sold in the game's Auction House for ingame money by players as well). The Class Outfits are also nicely detailed and stand on their own just fine if you're the type who doesn't really care what you're wearing.

The main sources of exp in the game are PvE quests and dungeon-running. If you're the sort who plays MMORPGS in spite of the genre's gameplay (which consists of killing monsters to level and get loot), then there won't be anything thrilling here. But for those of us who enjoy mowing down mobs and accumulating shinies of various types, it's handled very smoothly in EE. The zones are lovingly detailed, even though they are small compared to many other games', and there are a wide variety of different locales. I actually appreciated the 'smaller with more character' approach to zone design, since so many other games boast 'vast worlds' that are mostly barren land without anything interesting to see or find anyway. 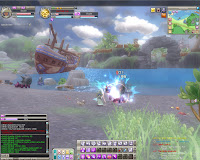 One of the social tools EE has that I think is neat, is the Profile system, which takes the old /who mechanic to a new level. You can fill out your profile with various personal info (including general interests) and top it off with a few sentences about whatever you feel like, and enable it to be visible whenever others do a player search on the server. I appreciate the concept of trying to help more likeminded people find each other ingame, and putting some personality into the mechanic. There is also a LFG tool, but it's rather clunky and isn't really used by most people that I've seen (most people ask for groups in Zone chat instead).

One thing I almost feel is a drawback, is the speed at which you level (at least up til level 30, which is my current situation). It's very easy to completely outlevel the quests in your current zone, especially if you are doing the simple grind-based 'guild quests' to level up your guild (more on that in a moment). As a completionist, I was actually happy if I died and lost (a small amount of) exp, since the stuff flows like water. With the current level cap being 50, I'm interested in seeing how much slower levels will go as I get closer to it. As it is, leveling goes as a fast clip, with the only restriction on how many classes you want to level simultaneously is time, money to level up class skills, and the bag space to store weapons and accessories for each class when you switch over.

Guilds in EE have levels that influence whether they can have a customized guild emblem or guild town. Guild towns offer the entire server valuable services, as they're the only sources of high level crafting recipes and materials. Guild leaders choose to 'hire' certain vendors for a weekly fee who then are available for anyone who visits that town to use. There are also rare 'traveling merchant' NPCs that appear from time to time with other things to sell. Guilds can set their own tax rates for their wares and services, with the profits from sales going into a guild fund. There is also a guild vault, quest board, and other little town perks available for guildmembers (including the ability to place statues of guildies in the town square). Besides having their own chat channel, the basic guild window also has a Message tab where members can post notes about various things to each other, which is pretty handy. There are future plans for GvG PVP as well, I believe.

I'm finding I'm enjoying these 'gamelike' MMOs more and more, mostly because I'm burned out of believing the hype endemic in Western MMOs claiming 'immersive, persistant fantasy worlds' which has to my experience NEVER actually panned out. In the end gameplay is king, not lofty ideals about 'immersion', 'photorealism', and complexity which never seems to serve any purpose but add drudgery to the play experience. I like killing monsters will flashy spells, grouping with people to fight bosses, decorating my character, and collecting cool items, and Eden Eternal offers all of those things wrapped up in a colorful package, which makes it a winner for me. And really, why do so many players seem to DEMAND that all MMORPGs be so huge that they can play them for 10 years straight without ever getting bored? Is the common Asian F2P model of designing most games with only a 2 or 3 year shelf-life bad, or does it instead encourage players and developers to try out new things more often? My personal opinion is starting to shift towards the latter.

Eden Eternal is a pretty game with some fun ideas, and worth checking out. After all it's free, so there's no harm in giving it a chance and seeing if it works for you. =)

Pros:
Art style
Switching classes at will
Guild towns
PvE dungeons \ raid bosses
Fast leveling til about lv38 or so
Unique selection of player races to be released in the future
A fair cash shop overall (imo)

Cons:
Smaller scale world and scope
Music is rather meh.
Typical MMORPG gameplay (kill stuff, get loots)
Crafting is time consuming, risky, and expensive
Mostly random color dyes in the Cash Shop
Gets grindy to level once you get around lv40
At higher levels it becomes harder to multi-class without using Cash Shop exp boosts
Posted by Pai No comments:
Email ThisBlogThis!Share to TwitterShare to FacebookShare to Pinterest
Newer Posts Older Posts Home
Subscribe to: Posts (Atom)