[Keeping the Glass Half Full]

It's been a few days since I've come back to WoW, and I realized that I really need to outline to myself what aspects of the game keep me coming back, and what aspects keep disappointing me. I've decided that I need to come to terms with what the game IS and what it ISN'T and dwell on the parts I like rather than always on the weaknesses of the game. Because it's too easy to always see the glass half empty, which I think is unfair to the game.

I think I need to take a page from Beau's book and learn to let go and not treat 'fun' like such serious business.

So I narrowed down the things I like most in WoW:

1. The story/world (including quests)
2. My character and developing her (so far, that's been solely by gear and achievements)
3. 5 man dungeons
4. Collecting fluff (pets, mounts, titles)
5. Playing and socializing with my guild/friends ingame.

From now until Cataclysm, I'm going to try and get the most out of those aspects of the game. I'm going on hiatus from the gear treadmill and raiding all together, and I'm even considering moving to an RP server/guild, at least on one of my characters. It's harder in WoW than in some other MMORPGs to find things to do outside the gear/PvP grind, but I really feel I need to start focusing on that or else I'm just going to fall into burnout mode again for the umpteenth time.
Posted by Pai No comments:
Email ThisBlogThis!Share to TwitterShare to FacebookShare to Pinterest

I've come back to WoW after having been gone for around 6 months or so. There are many new things added since I've been away, not the least of which is the much-touted 'Dungeon Finder' cross-server LFG tool. Since I wanted to get the achievement that gives a pet Pug, I've been using the Finder pretty much constantly for the past two days. 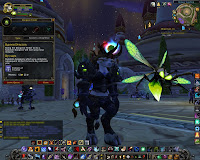 Now, when the cross-server LFG was first announced, my first feelings about it were mixed. On the one hand, I understand how hard getting a group can be depending on a server's population and class balance. But also, I worried that it would erode the already tenuous community that WoW servers have. When you're instantly teleported from anywhere in the world into a dungeon with 4 people from different servers that you'll most likely never see again afterward, it's hard to justify the effort to get to know them, talk to them, or to even have patience with the slightest mistake. I observed people leaving after one bad pull (and why not, when many can easily get another random group via the Finder). There's no incentive to really care about the people in the group other than as efficient loot farming aids. And there's no way to blacklist the asshats.

Whereas an unsocial attitude was present in many cases even before the Dungeon Finder, whenever you found a 'cool' person when pugging you could friends them and build groups via the Friends list (the original purpose of the list). In BC, I had a long list of cool non-guildies I knew on the server, and could put together groups rather regularly. But there's no need for that kind of effort now. There's no need to even walk to a dungeon's physical location anymore. They've been basically severed from the game world. The 'world' of Warcraft is now just a graphical lobby you hang out in to pass the time while waiting for your insta-port into a dungeon with people you have no incentive to ever get to know. For PvP I can understand the benefit of such a system, but for 5-man instances I think it does more harm than good. I mean, sure it's now simpler and faster than ever to 'grind badges for loot'. But I think making that process even more mechanical than it already was, is a step in the wrong direction. It's easier and faster, but not better ('Better' would be adding some variety in content to the game besides loot treadmills). Has Blizzard's goal of increasing the efficiency and speed of gear achievement finally trumped the gameplay and original premise of the game as an RPG? How far does a game have to go before it totally loses any semblance of the 'RPG' aspect of 'MMORPG'?

Though honestly, I don't know how else (barring server transfers/mergers) to solve the problem of difficulty in forming instance groups. But even so, I still feel like this latest development has diminished even more of the 'world' in World of Warcraft.
Posted by Pai No comments:
Email ThisBlogThis!Share to TwitterShare to FacebookShare to Pinterest
Newer Posts Older Posts Home
Subscribe to: Posts (Atom)